I have to admit that even though spam is a waste of time, sometimes it’s really funny to see all those messages in my inbox recommending to enlarge my penis or to buy cheap viagra, and so on -how the hell they find out my needs?!?! 😉

But the true is that lately my inbox is very boring, my antispam filter is working really well and I don’t even get those messages from hot eastern European girls that want to meet me 🙁

That’s why yesterday I was really happy when I received the following spam message in my inbox:

You have to admit that this message was very promising: even though I was not able to understand anything, at least it was coming from Natasha, a very nice name. But how could I contact Natasha if I don’t understand what she is saying? I took a look at the source code of the message: 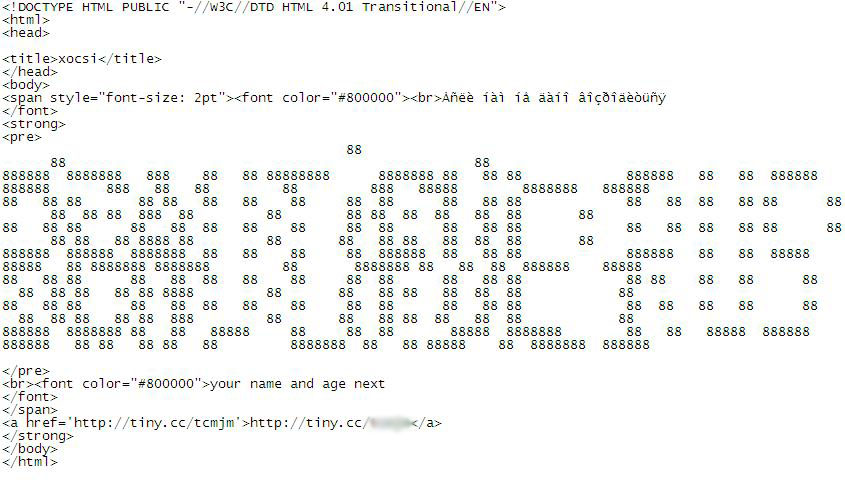 So there is really nothing new. But it has to mean something, don’t you think? Then I decided to copy the text and change the size of the font, and look what I found out:

Yes! Beatiful Russian Ladie :)Â  That’s perfect, so Natasha is Russian and beautiful, cool. Then, I took a look at the spam message, and I realized that the message was sent from a computer in Roubaix, France: Weird, but who cares? This is even closer to Bilbao 🙂

Well, everything is perfect now, but I could need some viagra, I’m getting old (already 34!)Â  and Natasha could be really passionate. And in this moment is when I received a second message, this one was even more confusing:

I was puzzled by this message, as I could understand the words but not the meaning. Definitely the attachment seemed to be malware, even though the antivirus didn’t detect anything. But I had to know where the text was coming from before playing with the attachment, so I took a risky decision and used one of the most powerful tools that can be used: Google ;)Â  So it took the first words of the message, and this was the result:

So it is a text from a book available in Google books… Now I can take a look at the attachment. Inside the zip file there’s a jpg file, a quick look to check that there is no exploit within the file and let’s see what it contains…: Cool, now I have all that I need to meet Natasha 😉