What Is a Smurf Attack?

A Smurf attack is a distributed denial-of-service (DDoS) attack in which an attacker floods a victim’s server with spoofed Internet Protocol (IP) and Internet Control Message Protocol (ICMP) packets. As a result, the target’s system is rendered inoperable. This type of attack gets its name from a DDoS.Smurf malware tool that was widely used in the 1990s. The small ICMP packet generated by the malware tool can cause significant damage to a victim’s system, hence the name Smurf.

How Does a Smurf Attack Work?

Smurf attacks are similar to a form of denial-of-service (DoS) attacks called ping floods, since they’re accomplished by flooding a victim’s computer with ICMP Echo Requests. The steps in a Smurf attack are as follows: 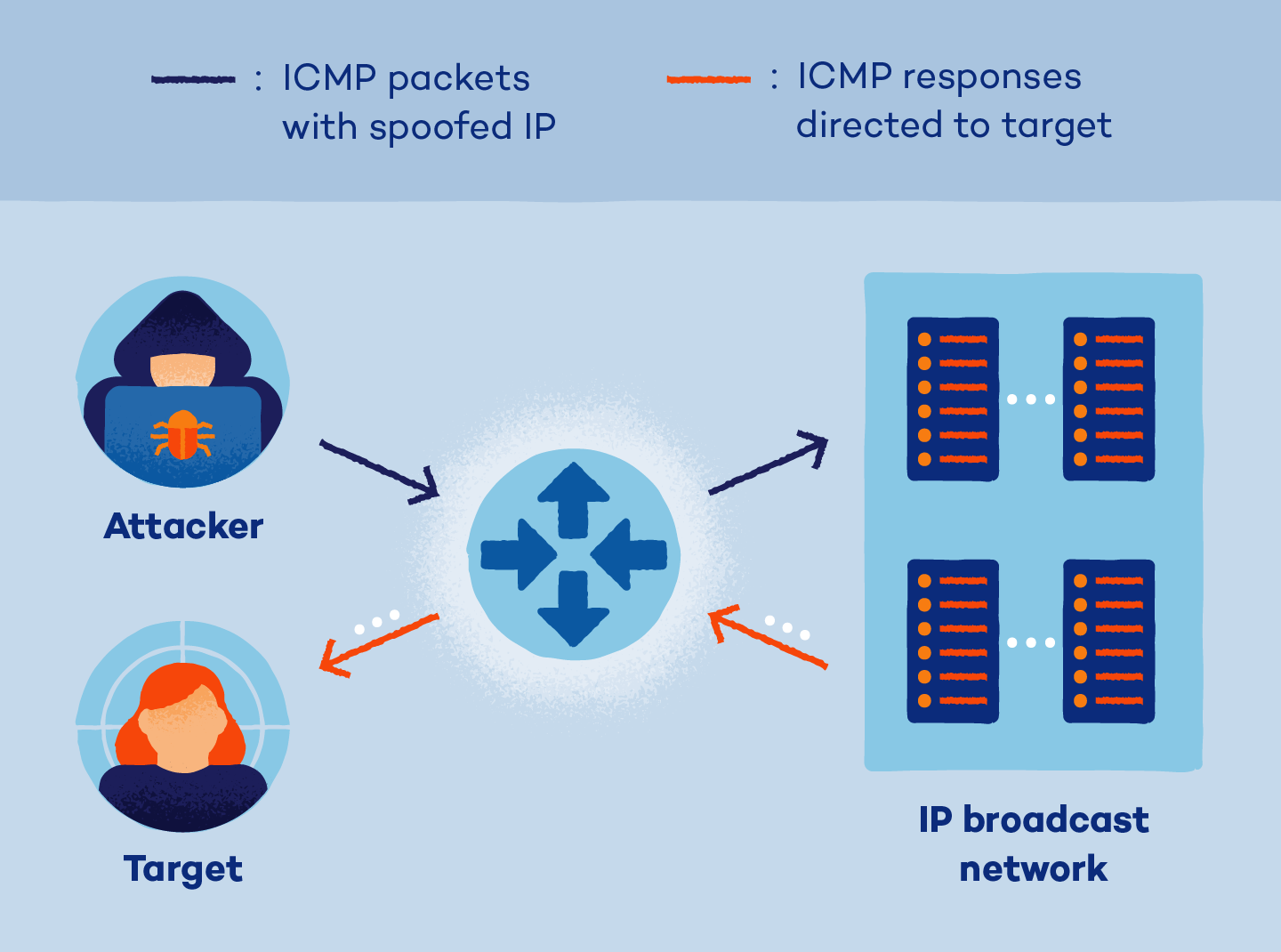 Another component to Smurf attacks that increases their damage potential is the use of Smurf amplifiers. The amplification factor correlates to the number of hosts on the victim’s IP broadcast network.

For example, an IP broadcast network with 300 hosts will yield 300 responses for every fake ICMP Echo Request. This enables an attacker with low bandwidth to successfully disable a victim’s system, even if that system has much higher bandwidth. Smurf amplifiers can be deployed as long as the attacker maintains a connection and the amplifiers are broadcasting the ICMP traffic.

To put this type of attack into simpler terms, it’s helpful to picture a metaphorical Smurf attack example. Think of a trickster (the DDoS.Smurf malware) calling an office (the IP broadcast network) while masquerading as the company’s CEO.

In our example, the trickster asks a manager to tell every employee to return his call (the ICMP Echo Requests) on his private number to give a project status update — but the private number (the spoofed IP address) actually belongs to the trickster’s targeted victim. As a result, the victim receives an onslaught of unwanted phone calls (the ICMP Echo Replies) from each employee in the office.

Smurf attacks are generally categorized as basic or advanced. The only difference in the type of attack is the degree of the attack that takes place. 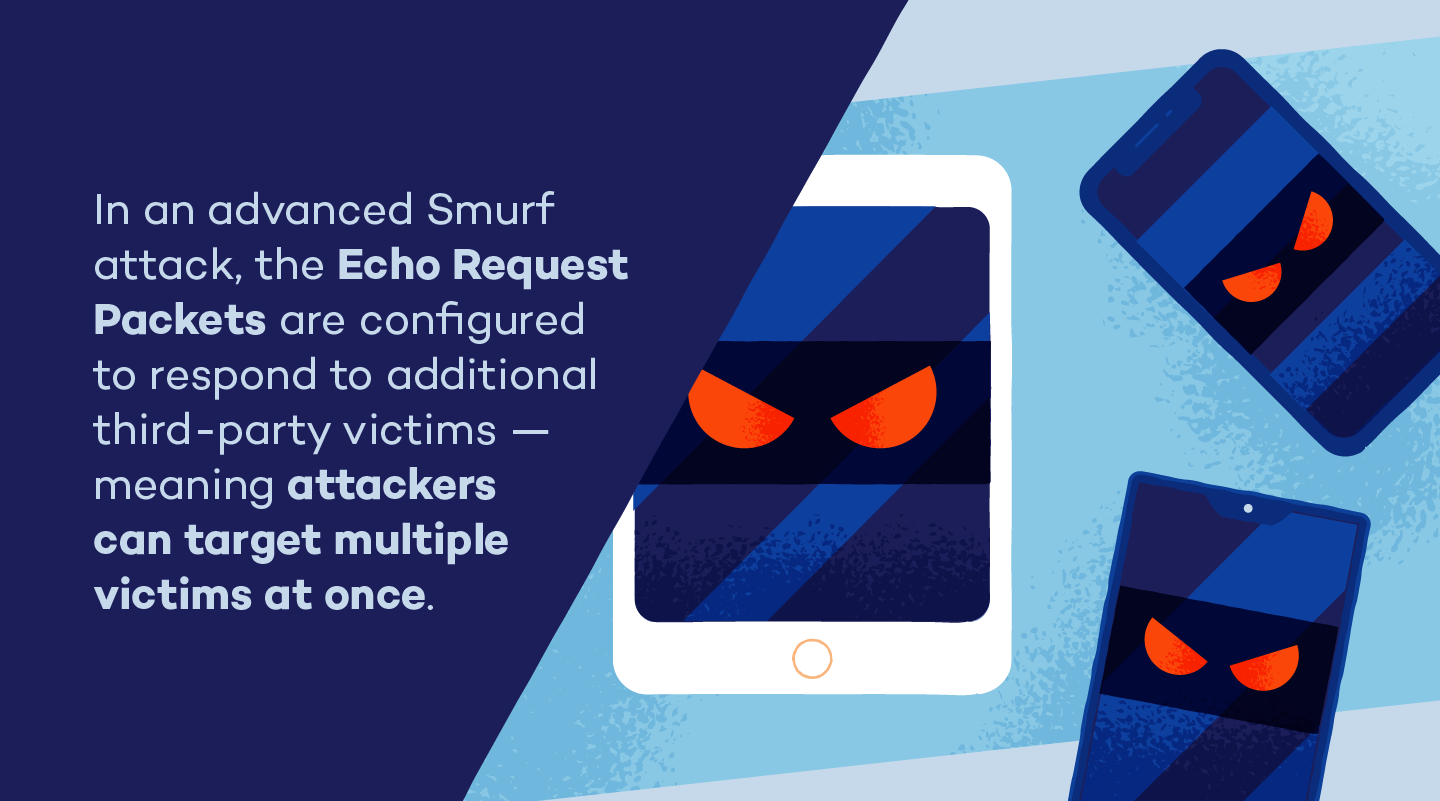 What’s the Difference Between a Smurf Attack and a DDoS Attack?

A DDoS attack aims to prevent victims from accessing their network by flooding it with fake information requests. A Smurf attack is a form of a DDoS attack that renders a victim’s network inoperable in a similar way, but the difference is that it does so by exploiting IP and ICMP vulnerabilities. Leveraging these vulnerabilities is what sets a Smurf attack apart, in turn increasing the potential for damage. 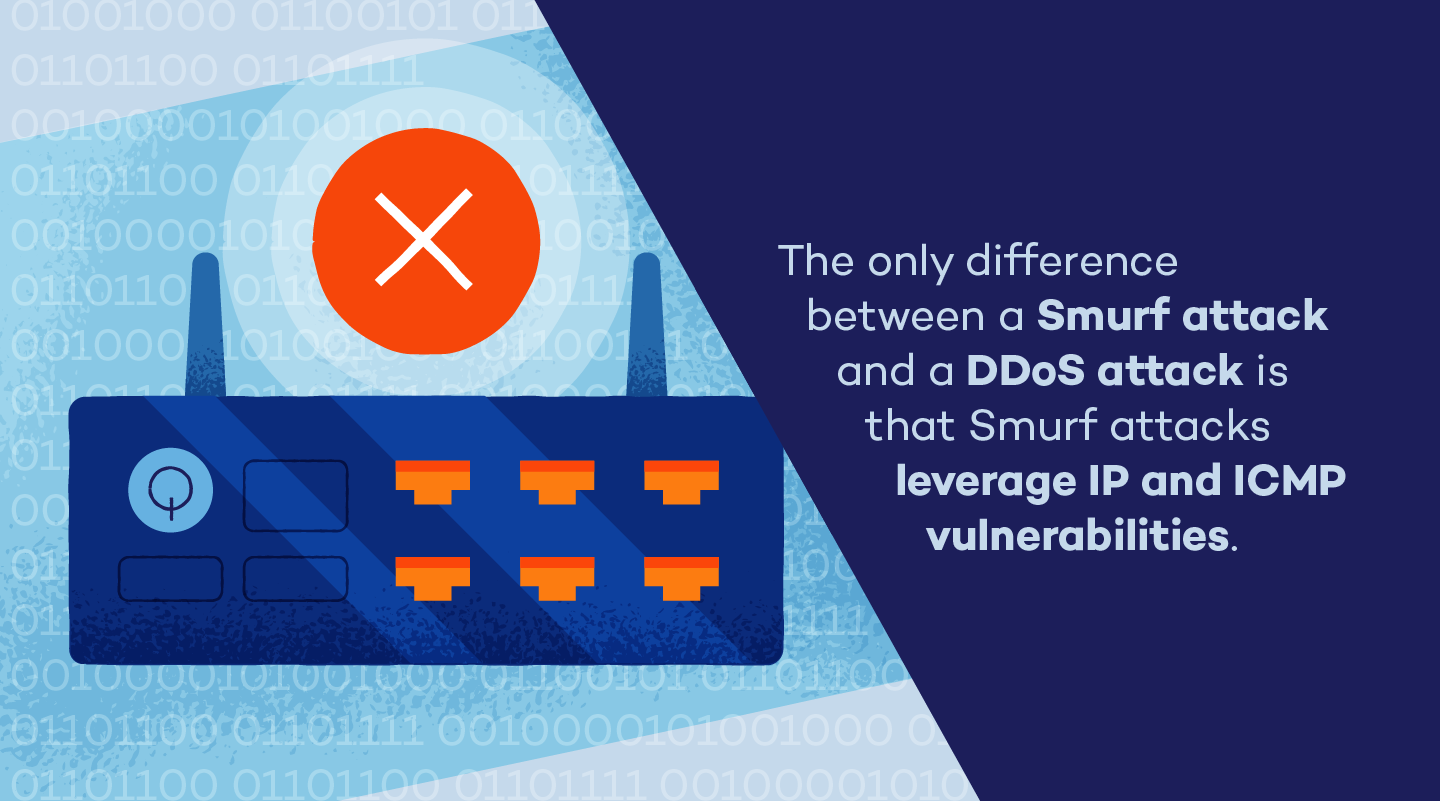 What’s the Difference Between a Smurf Attack and a Fraggle Attack?

Both a Fraggle attack and a Smurf attack are forms of a DDoS attack that aim to flood a victim’s system with fake information requests. The difference is that while a Smurf attack uses spoofed ICMP packets, a Fraggle attack uses spoofed User Datagram Protocol (UDP) traffic to achieve the same goal. Everything else about these attacks are the same.

Consequences of a Smurf Attack

While the goal of a Smurf attack is to render a victim’s system useless for days or even hours, iit can also be the first step toward more harmful attacks like data theft or identity theft. Either way, the consequences of a Smurf attack remain:

Mitigation Methods and How to Protect Yourself

Mitigating a Smurf attack comes down to securing your network, which begins with your router. To protect yourself, you’ll need to configure how your routers and devices interact with ICMP packets. This involves two important prevention steps: 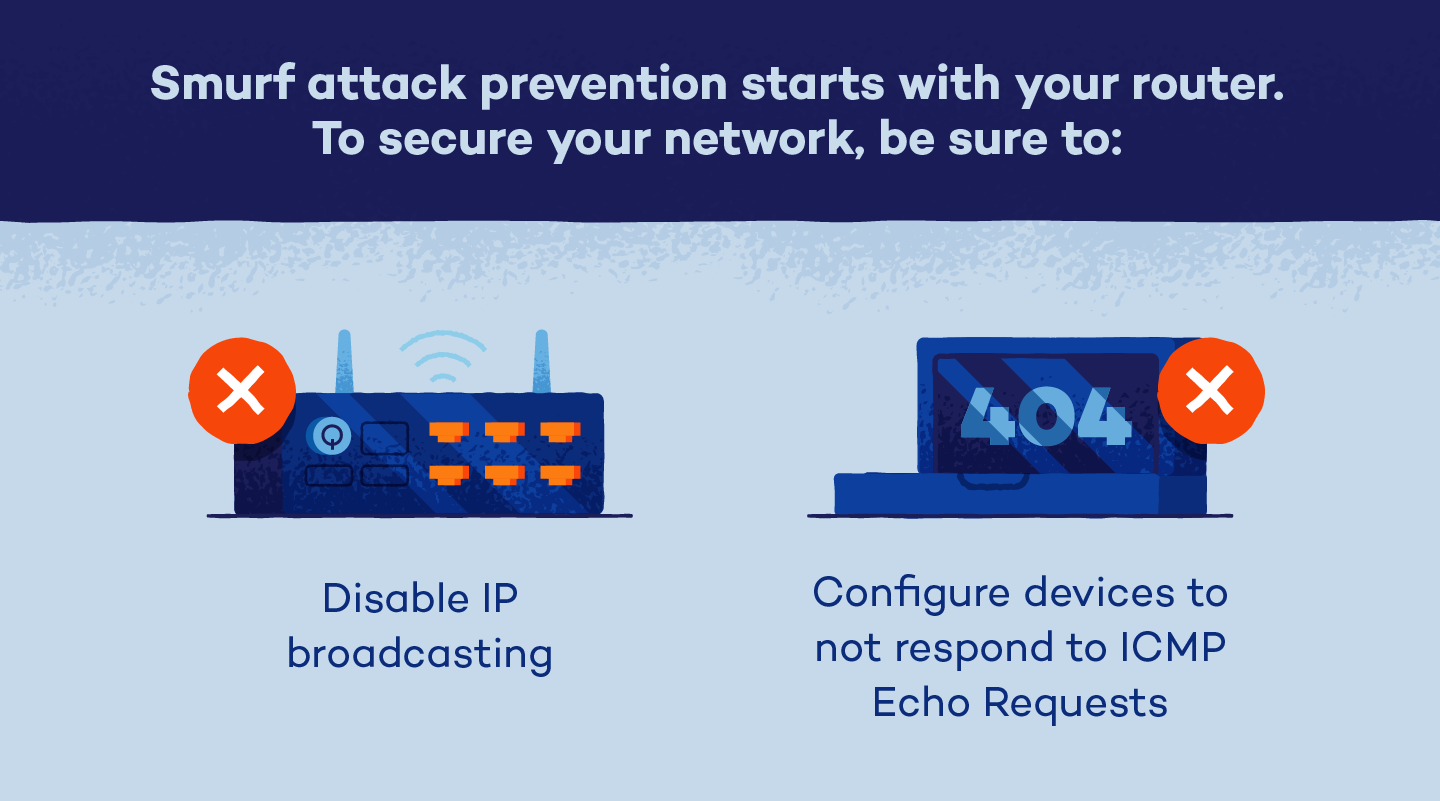 If your current router is an older model, it’s wise to invest in a new one, as newer models usually come with the above configurations already in place by default.

In addition to these steps, investing in an antivirus and anti-malware solution to secure your firewalls adds an added layer of protection to your network.

As with most cyberattacks, prevention is often the best strategy for protection. While Smurf attacks are nothing new, they remain a common tactic among cybercriminals looking to exploit vulnerable networks. To further protect yourself from cyberattacks in all their forms, consider installing a trusted antivirus software to keep all your devices secure.