PandaLabs, Panda Security’s anti-malware laboratory, today published its Quarterly Report for Q1, analyzing the IT security events and incidents from January through March 2013. In the first quarter of 2013 alone, more than six and a half million new malware samples were created, following the trend of increasingly prevalent malware statistics of previous years. Trojans continue to dominate the threat landscape, representing nearly three out of every four new malware samples in circulation, similar numbers to those of 2012.

Trojans set a new record, causing nearly 80 percent of all computer infections worldwide. Despite their inability to replicate, Trojans are capable of triggering massive infections through compromised Web sites that exploit vulnerabilities in browser plug-ins like Java, Adobe Reader, etc. This attack method allows hackers to infect thousands of computers in just a few minutes with the same Trojan or different ones, as attackers have the ability to change the Trojan they use based on multiple parameters such as the victim’s location, the operating system used, etc.

“Trojans are cyber-crooks’ weapon of choice, which explains why they account for most new specimens in circulation and infections triggered in the first quarter of the year,” explained Luis Corrons, technical director of PandaLabs. 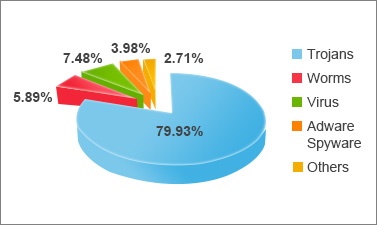 COUNTRIES WITH THE MOST INFECTED COMPUTERS 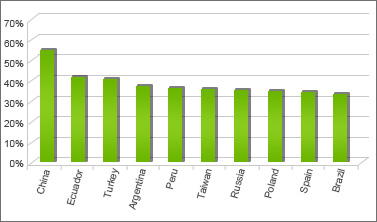