Panda Security, The Cloud Security Company, has just published the results of its Quarterly Report for Q3 2013, drawn up by PandaLabs, the company’s anti-malware laboratory. One of the main conclusions that can be drawn from this global study is that malware creation has hit a new record high, with nearly 10 million new strains identified so far this year. In fact, the number of new malware samples in circulation in just the first nine months of 2013 has already met the 2012 figure for the entire year. Trojans remained the most pervasive threat, accounting for most new threats and infections worldwide.

One of the most notable –and notorious– threats over the past months was CryptoLocker, a new ransomware sample that hijacks users’ documents and demands a ransom for them

There was also a significant increase in the number of attacks that exploit DNS cache poisoning techniques. Several large websites hosted in Malaysia fell victim to this type of attack, including the local websites of companies such as Google, Microsoft or Kaspersky.

Android continued to be the top target among all mobile platforms, despite some high-profile attacks on iOS, Apple’s operating system.

Cyber-War: NSA remains in the eye of the storm

As far as cyber-espionage is concerned, the United States took the spotlight off China after new revelations emerged about the clandestine PRISM program operated by the NSA (National Security Agency) to obtain user data from major U.S. companies such as Microsoft, Google, Apple, Facebook, etc.

“Everything seems to indicate that there will be more revelations about other NSA surveillance programs to indiscriminately spy on users, companies and governments around the world”, said Luis Corrons, technical director of PandaLabs.

Trojans once again topped the rankings, accounting for 76.85 percent of all new threats identified by PandaLabs, followed by worms (at a distant 13.12 percent), viruses (9.23 percent) and adware/spyware (0.57 percent). 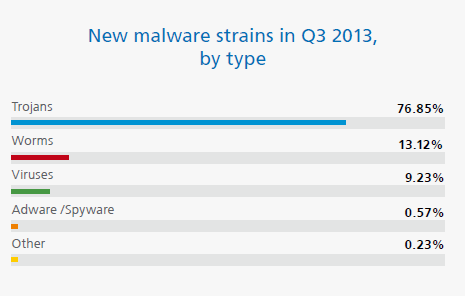 Additionally, Trojans continued to be the weapon of choice for malware writers to infect users’ systems.  78 percent of all computer infections registered in the third quarter of 2013 were caused by Trojans, followed by viruses (6.63 percent), adware/spyware (6.05 percent) and worms (5.67percent). 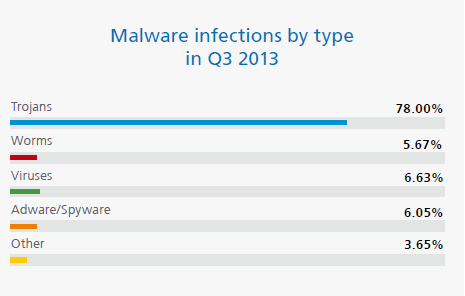 Latin America remained the most-affected area by malware. In any event, the ‘Top 10’ list of most infected countries includes nations from all over the world, with China at the top with nearly 60 percent of all computers riddled with malware, followed by Turkey (46.58 percent) and Peru (42.55 percent).

At the other end of the chart, Europe continues to have the lowest infection rates.  The least infected countries were Netherlands (19.19 percent), United Kingdom (20.35 percent) and Germany (20.60 percent). The only non-European country in the Top Ten was Australia, in ninth place with 26.67 percent. 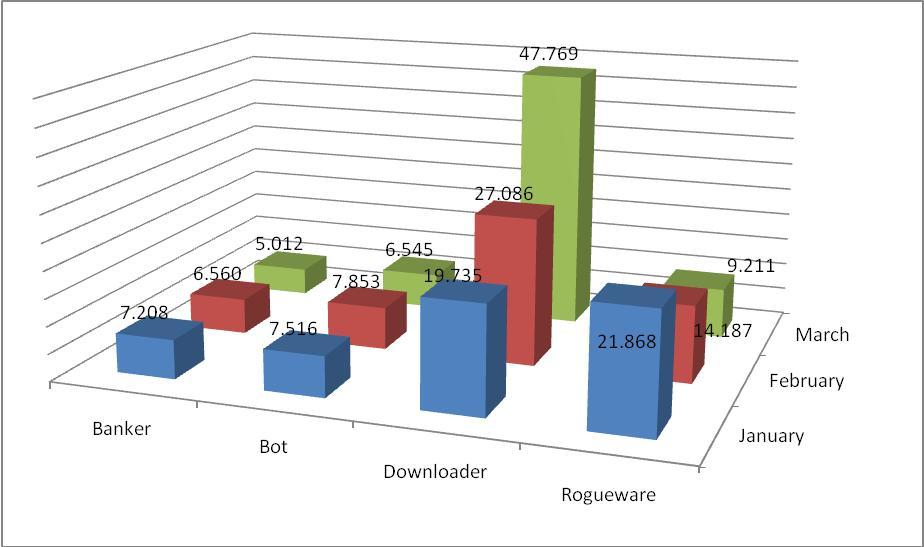