PowerLocker, also called PrisonLocker, is a new family of ransomware which in addition to encrypting files on the victim’s computer (as with other such malware) threatens to block users’ computers until they pay a ransom (like the ‘Police virus’).

Although the idea of ​​combining the two techniques may have caused more than a few sleepless nights, in this case the malware is just a prototype. During its development, the malware creator has been posting on blogs and forums describing the progress and explaining the different techniques included in the code.

In this post for example, the creator describes how PowerLocker is a ransomware written in c/c++ which encrypts files on infected computers and locks the screen, asking for a ransom.

The malware encrypts the files, which is typical of this type of malware, using Blowfish as an encryption algorithm with a unique key for each encrypted file. It stores each unique key generated with an RSA-2048 public/private key algorithm, so only the holder of the private key can decrypt all the files.

Also, according to the creator, PowerLocker uses anti-debugging, anti-sandbox and anti-VM features as well as disabling tools like the task manager, registry editor or the command line window.

However, all the publicity surrounding PowerLocker that the creator has been generating across forums and blogs before releasing it, has led to his arrest in Florida, USA. Consequently, today there is no definitive version of this malware and there is no evidence that it is in-the-wild.

Nevertheless, we still feel it’s worth analyzing the current version of PowerLocker, as someone else could be in possession of the source code or even a later version.

The first thing PowerLocker does is to check whether two files with RSA keys are already created, and if not, it generates the public and private key in two files on the disk (pubkey.bin and privkey.bin).

Unlike other ransomware specimens, which use the Windows CrytoAPI service, PowerLocker uses the openssl library for generating keys and encrypting files. 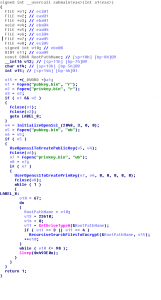 Once it has the keys, PowerLocker runs a recursive search of directories looking for files to encrypt, excluding, not very effectively, files with any of the file names used by the malware: privkey.bin, pubkey.bin, countdown.txt, cryptedcount.txt. It also avoids $recycle.bin, .rans, .exe, .dll, .ini, .vxd or .drv files to prevent causing irreparable damage to the computer. The creator has however forgotten to exclude certain extensions corresponding to files which are delicate enough to affect the functionality of the system, such as .sys files. This means that any computer infected with PowerLocker would be unable to reboot. 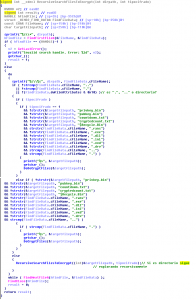 Moreover, in this version it is possible to use a parameter to control whether the ransomware encrypts or decrypts files using the pubkey.bin and privkey.bin keys generated when it was first run.

This version does not include the screen lock feature described by the creator, although it displays a console with debug messages, names of the files to encrypt/decrypt, etc. and asks you to press a key before each encryption or decryption.

At present, there is only a half-finished version of PowerLocker which could practically be labelled harmless, and which lacks many of the most important features that the creator has described on the forums and blogs, such as anti-debugging, screen locking, etc.

Despite it not being fully functional we would recommend having a system for backing up critical files, not just to offer assurance in the event of hardware problems, but also to mitigate the damage of these types of malware infections.

Also bear in mind that if you don’t have a backup system and your system is infected, we certainly do not recommend paying the ransom, as this only serves to encourage the perpetrators of such crimes.