What Is Encryption and Do You Need It?

Nearly 294 million Americans were victimized by cyber data infringements such as breaches and data exposures and leaks in 2021. Surprisingly, that number is the lowest it’s been for five years. It may be time for you to invest in cybersecurity tools for personal use to protect yourself and your family against such attacks.

Encryption is one way to get started with your cybersecurity journey. Encryption is to create and decipher encoded messages with special keys so only select eyes can view them.

In the world of cybersecurity, many terms can seem cryptic. We’ll break encryption down so you understand what encryption is and how encrypted data keeps your family safe while surfing the web.

There are a few ground-level terms to understand when learning about encryption, one of which is cryptography. In layman’s terms, cryptography is the study and practice of writing and solving codes. The codes are typically messages containing sensitive or private information. The purpose of practicing cryptography is to ensure such messages are viewed by the intended recipient only.

What is a Cryptographic Key?

Storing, sending and deciphering the codes requires advanced mathematical principles and equations. This is where the cryptographic key comes into play.

A cryptographic key — or simply, a key — is the string of letters and numbers used in encryption to scramble data to appear random and illegible. It works in verse as well. Keys are often short enough that they can be remembered. 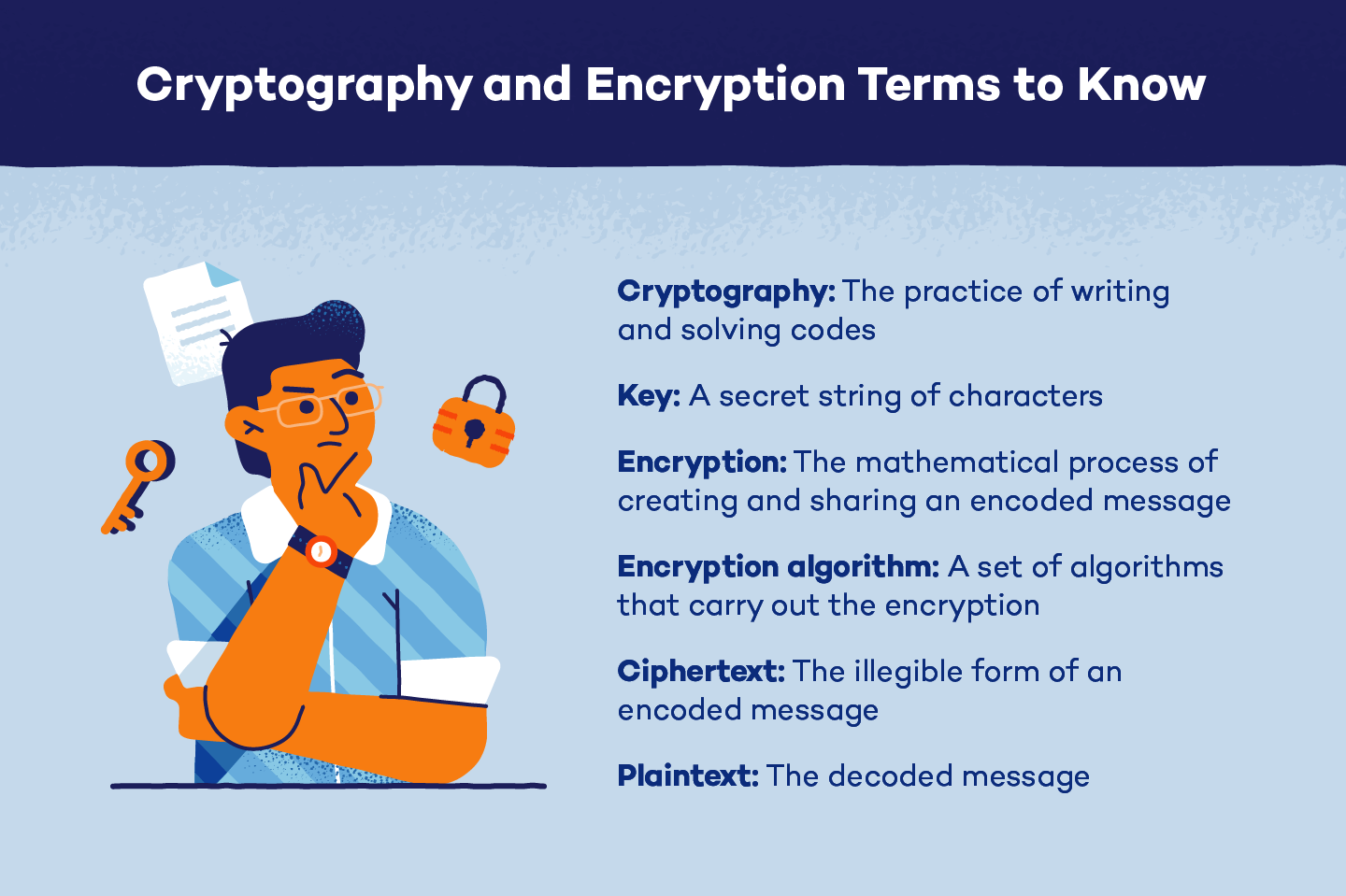 Encryption and cryptography are related concepts but not interchangeable. Encryption is the application of cryptography, meaning it’s the actual mathematical process of creating and deciphering an encoded message. With so many devices favoring cloud storage today, users need to know their data is protected. Secure encryption can offer this peace of mind.

How Does Encryption Work?

At this point, you might think that encryption isn’t an overly complicated concept. You’d be correct, but it gets a bit more complex when discussing how encryption works.

Encryption is a mathematical equation, and you already know parts of the formula — cryptographic keys. Other factors include encryption algorithms, ciphertext, and plaintext.

Each algorithm requires a specific number of keys, determining which type of encryption is in place. 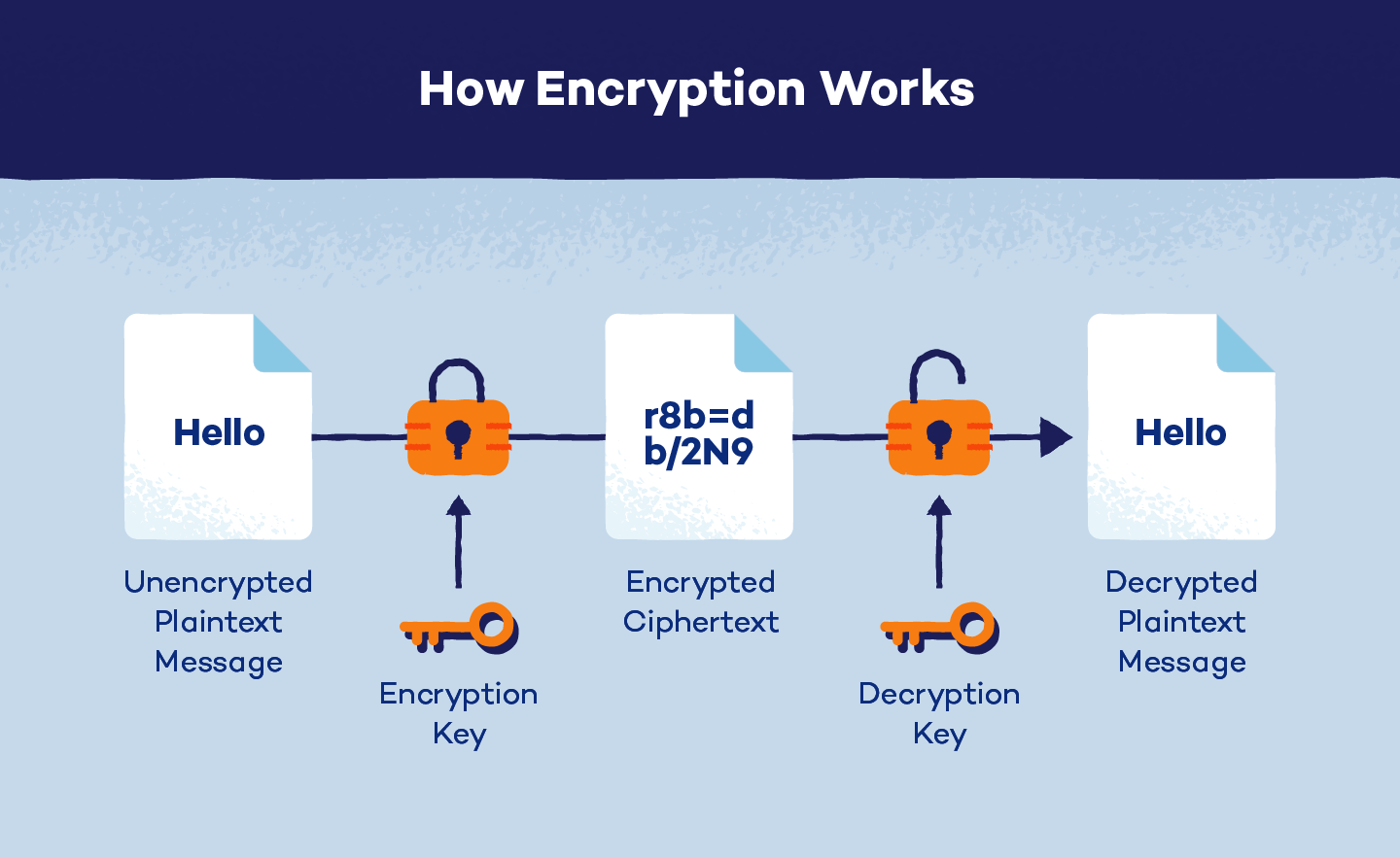 The two main methods of encryption are asymmetric and symmetric. While they work in similar ways, the difference in the number of keys sets them apart.

Since two different keys are required, asymmetric tends to be a more secure method of encryption. This is because the encoded message can only be decrypted with the private key. However, it is a slower process.

RSA is a common asymmetric encryption algorithm widely used in real-world applications. For example, the algorithm secures information sent over the internet and collected by websites in SSL certificates, which create an HTTPS connection. 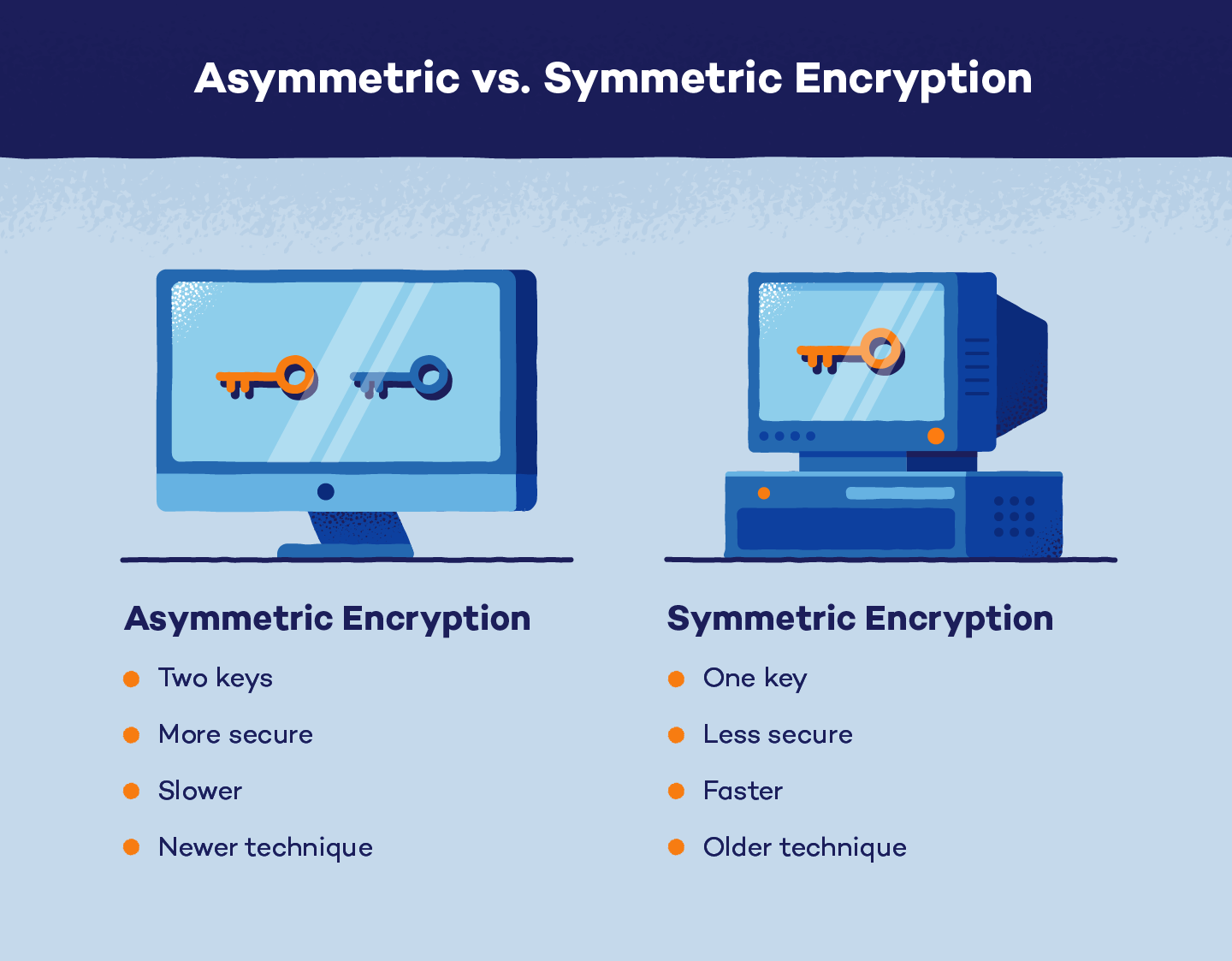 Compared to asymmetric encryption, symmetric encryption is less secure with only one key but quicker to run. Another disadvantage is that since there is only one secret key, all parties who need access to the plaintext message must exchange the key before decoding occurs.

Some symmetric encryption algorithms, like DES, were outdated and replaced with AES and Triple DES. This form of encryption is often used in online payment applications and random number generation.

Seventy-four percent of Americans worry about computer hackers stealing their personal, credit card and financial information. The primary benefit of encryption is ensuring your family’s safety by keeping such data stored or shared online confidential. Encryption stops data breaches before they even begin. 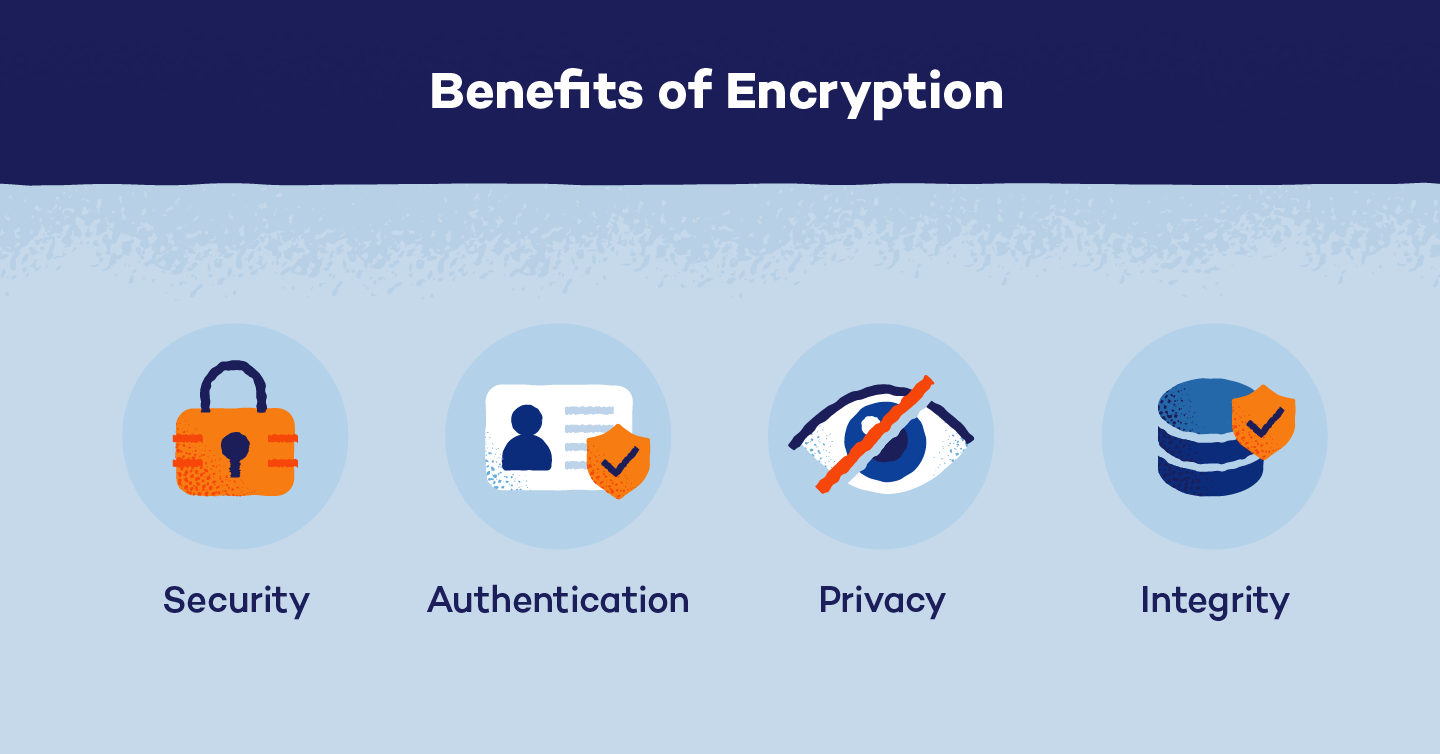 You shouldn’t worry about what will happen if your child accidentally clicks on a suspicious link while using your home computer. With a security system in place that halts any malicious intent, you don’t have to.

Encrypting files ensures any sensitive information or intellectual property shared or stored over the internet is protected. Although ransomware attacks predominantly target organizations, it’s not to say individuals cannot fall victim. However, an added layer of protection like encryption can put your mind at ease.

Like security, encryption measures protect your private information from getting into the wrong hands and allow you to control your data.

Encryption allows for safe internet browsing using standards like SSL and HTTPS. Users can trust such sites when entering personal information to make purchases or sign up for communication. By encrypting emails, you can rest assured that any personal information, signatures or passwords are safe from hackers. To further protect your privacy online, clear your digital footprint and limit the amount of data you put on the web.

When sending sensitive data to another endpoint, you want to ensure the person receiving the information is the intended recipient. Encrypted messages require a key to decrypt the data, which helps you verify that the person viewing your message is the correct receiver.

Skilled blackhat hackers might not just be after your information to hold for ransom or fun. Instead, some hackers aim to alter your data to commit fraud. With encryption, the likelihood of this happening is far less, so you can trust the integrity of the data you send and receive.

Do You Need to Encrypt Your Computer?

Get started encrypting your home computer by analyzing your use and needs. Your device may have encryption and security technologies pre-installed. However, if you don’t have complete systems pre-installed or would like to upgrade your security levels, consider purchasing additional cybersecurity and encryption software.

Encryption technology might be worth it if you’re at a higher risk of theft or losing your device because you travel with it or work in public areas. Otherwise, if your device holds any passwords (including autofill passwords saved by your browser), personal data or sensitive files, you may also wish to consider encryption software to protect yourself from hackers.

For those who don’t wish to install elaborate encryption software, try a personal VPN (virtual private network) instead. Remote VPNs are a simpler way to encrypt your online activity. Your device connects to a VPN server, so instead of the website tracking your unique IP address, your activity is associated with the address of the VPN server.

VPN encryption also protects you and your online activity from cyberattacks. If the hacker doesn’t have access to the cryptographic key, they won’t be able to interpret your data. 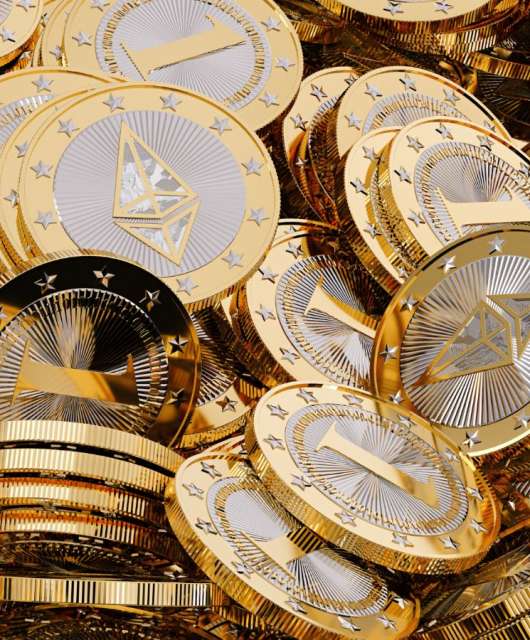