– An Internet portal offers bots designed for a range of activities at prices ranging from $95 to $225. The entire catalog of bots costs $4,500

– The creators claim that all bots are undetectable, as they randomly change users, agents and headers. They also include automated CAPTCHA generators 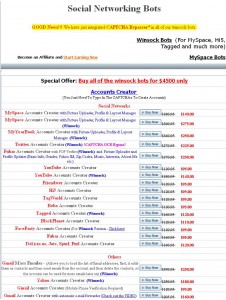 Each entry explains the reason for which the bot has been created: creating multiple accounts simultaneously on social networks; identity theft and stealing friends, followers or contacts; automatic sending of messages, etc. According to the page: “(All Bots Work In A Conventional Manner, They Gather Friend IDs/Names And Send Friend Requests, Messages, Comments Automatically).“

Luis Corrons, Technical Director of PandaLabs, said “We are still investigating, but this is another example of the lucrative business that malware represents for cyber-criminals. The catalog of bots for sale describes some of the many activities they can be used for: some of them more innocent, if we could say that, such as creating accounts, and others more specifically focused on fraud, including theft of identities, photographs, etc.”. Prices range from $95 for the cheapest bot to $225 for the most expensive. The entire catalog can be bought for $4,500, and guarantees that they will never be detected by any type of security solution, claiming that they have been developed to change users, agents and headers as many times as is necessary to prevent them from being blocked. They also get round CAPTCHA security mechanisms included on many websites, so the buyer just has to set the parameters and leave the bots to operate on their own. Finally, the bots include perpetual updates.

Some of the more unusual activities for which the bots have been designed include:

– An automatic generator of visits and views for YouTube videos
– Optimization of rankings in Alexa
– Vote tampering in Digg
– Unlimited sending of messages on online dating sites such as DirectMatches
– Etc.

The bots are specially adapted for each website, and the list of targets include not just globally popular social networks or communities, but also local sites, such as Tuenti, Yahoo UK, etc.

“On the same portal, there is also an offer to earn money by reselling these ‘products’ as an affiliate. And it is these kinds of models that help to build cyber-mafias and organizations that operate across several countries. We should still not forget, however, that this business exists not just because there are developers creating the threats, but also because there are criminals who are prepared to pay for them. Until we are able to prevent people from defrauding victims in this way, this business model will continue to thrive”, concludes Luis Corrons.