There have been several viruses that have been discussed during the last few years. Malware has affected thousands of computers around the world, and has caused billions of dollars in losses across many countries.

Over the next few weeks we’ll be reviewing a list of viruses.  We’ll begin the list with ‘Melissa.A‘, a virus that shares a woman’s name and made its appearance on March 26th, 1999 in the United States.

‘Melissa.A’ used social engineering techniques, since it came with the message “Here is the document you asked me for…  do not show it to anyone”. In just a few days, she starred in one of the most important cases of massive infection in history, causing damage of more than 80 million dollars to American companies. Companies like Microsoft, Intel and Lucent Technologies had to block their Internet connections due to its action.

When opening a document infected with the ‘Melissa.A’, the virus creates an e-mail with the following features:

The recipients of this message were the first 50 addresses ‘Melissa.A’ found in the address book in Outlook. This was the first macro virus that used this technique, until this moment there hadn’t been a virus that affected users by sending a Word document within an email. 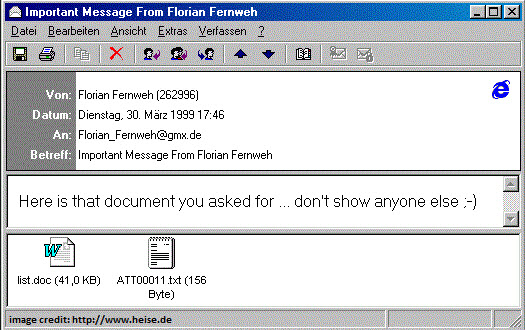 The creator of ‘Melissa.A’, David L. Smith, pleaded guilty but said he did not expect such high economic damage. This malware was created in memory of a topless dancer in Florida with whom he had fallen in love with.

Smith was sentenced to 10 years in prison. He spent 20 months in prison and was fined $ 5,000, and then collaborated to help the FBI in the search of Jan de Wit, the Dutch creator of the Anna Kournikova computer virus.

Have any of us been infected with Melissa?

More| How to remove Melissa.A?